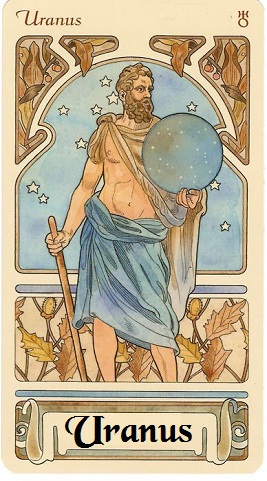 Uranus is the third largest planet in the solar system and the seventh planet out from the Sun. Although there is some indication that the ancients were aware of its existence, it was not officially discovered or named until the 13th March 1781, by William Herschel.

Actually discover is too strong a word. The more correct word would be confirmed . Almost a hundred years before, in 1690, after mapping and noting its movements, John Flamsteed catalogued it as 34 Tauri . In fact, he even named it the Georgium Sidus (Georgian Planet) after his patron, King George III of England. However, it was thought to be a star, not a planet. So although it had been observed, it wasn t known to be a planet until 1781.

Even then it took almost 70 years to give the planet a name. It was Bode, whose infamous Bodes Law later led to the discover of Pluto (see Scorpio) that proposed that even though this was the first planet to be named since ancient times, its name should conform to classical mythology and be in keeping with the rest of the planets. So, in 1850 it was named Uranus.

Aquarius, as a sign, is infamous for non conformity. Uranus itself shows the same traits. While most of the planets spin on an axis that is almost perpendicular, Uranus axis is almost parallel to the ecliptic. When Voyager passed by Uranus, its south pole was pointed almost directly at the Sun. Whereas on earth the Sun shines into the equatorial regions around the equator, on Uranus it is the other way round, with the poles getting more light and the equator less. Trust Uranus not to conform. Even then scientists can not decide which is the North Pole and which is the south.

Uranus is made up of mainly rock and ice. In contrast to Jupiter and Saturn that are mainly hydrogen gas, Uranus has on 15% hydrogen. Uranus and Neptune have huge liquid metallic hydrogen blankets, but doesn t have the rocky core that Jupiter and Saturn have.

Uranus has an unusual feature. It changes colour, depending on the season and the direction the Sun is shining from. By 2007 the Sun will be directly over Uranus equator, bringing out spectacular colours. Even in its every day colours it is a beautiful blue planet. It gets its colour because the methane in the atmosphere absorbs all the red light, leaving just the blue. We can not actually see Uranus surface, as it is covered in methane cloud, but if we could, we would see coloured bands, like Jupiter has.

Like the other giant planets, Uranus has rings, but unlike Saturn, they are not as visible. So far we know there are at least 10 small moons and 5 large ones.

Uranus is sometimes visible to the naked eye as a small, unblinking light, on a very clear night. You will need to know where to look, but you can see it, even with a pair of binoculars.

The discovery of Uranus was the first of the Modern Planets and as such, it came to embody the spirit of the time that it was discovered. Aquarius and Uranus energy is said to be forward looking, has a dislike of tradition and encourages originality, individuality and ideas. It is also associated with discoveries, technology, inventions and anything that is progressive. When Uranus was discovered, these were all aspects of the time. In the 18th Century man was moving away from feudal society where there was no individuality. Unless you were upper class you had no choices in life and you lived in servitude. That all changed during that time as literally New Worlds were being discovered. Colonisation was taking place around the globe and ordinary people left the United Kingdom and Europe, all the old countries and created new ones in the United States, Canada, Australia and New Zealand. It was a time of individuality and revolution. We saw the French Revolution and the American Revolution as well as the Industrial Revolution. It was a time of discovery and enormous technological advancement. Even the invention of the telescope made Uranus s discovery possible. These are all Aquarian qualities.

Uranus was named after the Greek god of the same name. Uranus featured in Capricorn, as the father of Cronus, 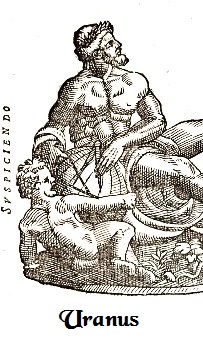 ruler of Saturn. Uranus was the earliest male god, taking part in creation itself. Uranus (Heaven) and Gaia (Earth) mated and their children populated the earth. Some Creation Myths say that Gaia gave birth to Uranus while she slept, so Uranus is seen as both the husband and son of Gaia. Gaia, or mother earth laid out all the land, but it was barren until Uranus poured down his water upon the land and gave it life and everything began to grow. As his water continued to pour, it formed the rivers, lakes and oceans where all life began.

To the ancients, Uranus was the Heaven, giver of all life and Supreme God. It was his offspring that all the races that follow, would come from. Uranus was the common ancestor of all.

As each of Uranus and Gaia s children were born, because they were made of flesh, they repulsed him. He couldn t bear to look at them so he banished them down to the Underworld. It was said that this was so deep; that a rock dropped would take 9 days to reach the bottom. By the time Gaia gave birth to her 7th child, Cronus, her anger and resentment had grown to such a point that she urged Cronus to take a flint blade that she had fashioned into a scythe and murder Uranus. He did this by cutting off his genitals and throwing them into the ocean. But in doing so, drops of blood fell on the land and even from those drops of blood, even more offspring sprang up, including the Furies . His children by Gaia, the Titans, ruled for thousands of years (see Capricorn) in what was the Golden Age of Man. 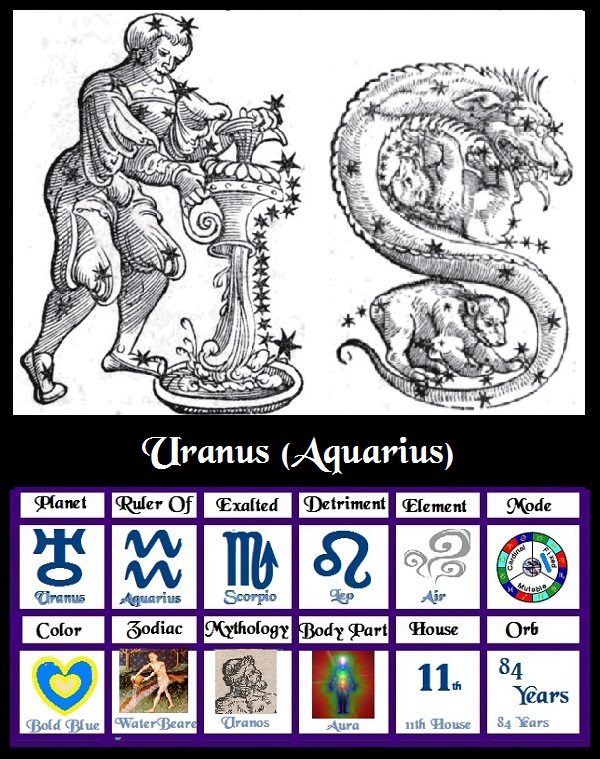 In Aquarius we find an energy that is above all the other signs. This is air energy, but unlike Gemini and Libra, this is energy that goes beyond the individual, to encompass humanity itself. Just as Ganymede was able to transcend the earthly realm and enter the domain of the Gods, so can Aquarian energy. The water Aquarius pours, flows above and below . In the form of Aquilia (Zeus eagle), he was able to fly above the earth and observe mankind from above, yet he was a mortal. Aquarian energy lifts above the mortal realm and the drudgery of daily life and taps into something higher. Therefore, Aquarius energy is always on the cutting edge, able to see further into the future and to greater heights than the other zodiac signs.

It is a sign that is forward thinking, it is non conformist, balks at tradition and celebrates originality and individuality. It will rebel against repression of the human spirit, just as the time in which Uranus was discovered did. As Cup bearer to the Gods, Ganymedes role was also to pass on information. Zeus often sent him out in eagle form to bring back information. Thus Aquarius, as an air sign, is more exulted. Aquarian energy is often concerned about the plight of humanity. When people stage protests or speak out against oppression, they are using Aquarian energy. Where other signs may see what is , Aquarian energy sees what can be .

As the middle sign in the winter triad it is a sign that has to be independent. This is not a time of year for activity, but of discovering ideals and ideas for the future. Aquarius is always looking forward, but on a higher plane than mere survival. Uranus himself gave life to all mankind, life that continued long after he was gone. Aquarius energy wants to develop concepts that will create a better future and live on. Aquarian eyes are both on the future and on a higher realm than those of its zodiac mates. 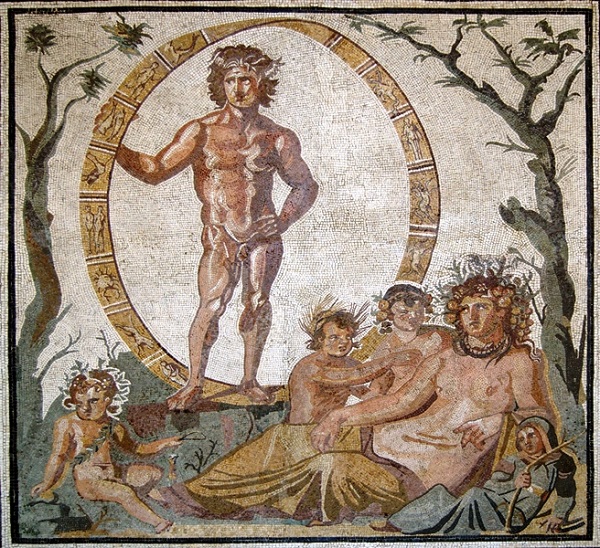