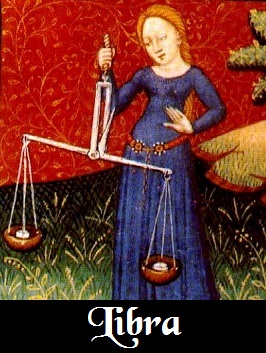 Libra is the most modern of all signs and did not appear as a separate sign until Roman times. Because of this and a natural Libran drive to form partnerships, Librans can easily lose themselves into relationships. It is this fight against this, which makes them so outwardly independent and resistant to either smothering someone else or to being smothered in return.

There are two major concepts that define all Librans, that of balance and relationships. The constellation of Libra is that of The Scales, ruled by Astrea, goddess of Justice. It is her image that we see outside courthouses, holding a sword in one hand and The Scales in the other, while blindfolded. Libra is the sign of balance and harmony and when things are not balanced in a Librans life, they have got to move heaven and earth to get into balance or harmony, or they will feel out of sorts. The concepts of fairness, balance and harmony are paramount to all Librans.

Libra is ruled by Venus, goddess of love and in Libra we find the aspect or the side of Venus that binds couples together. While Venus also rules Taurus, in Taurus her focus is on beauty and possessions, in Libra her focus is on the concept of love and relationships and in this position, Venus rules marriages and partnership. It is very rare to find a single Libran and those that you do find, are simply waiting for Mr or Ms Right, for a Libran will not settle for anyone who does not have long term prospects. 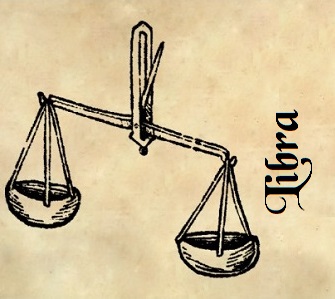 Although Libra is a new sign, the aspect of Venus that is personified in Libra, can be traced right back to the Creation myths. It was said that during the Creation, Venus was moving through the constellation of The Scales and that it was while moving through here, that she bound human couples together under the yoke of matrimony. Since ancient times, Venus and The Scales have been linked to relationships and marriage and Libra itself, rules the area of our charts that rules marriage and partnership.

The concept of balance and harmony are taken to a deeper level when you realise that the Sun moves into Libra on the autumn/spring equinox, when the days and nights are of equal length. As the first of the autumn triad, Libra is a cardinal sign. A cardinal sign is the first sign of each of the four seasons and cardinal signs are the initiators, the ones with the ideas and who are focused on moving forward. Moving into the autumn triad, Libra is focused on balance and harmony. This comes from an astrological time of year when things had to be carefully measured, weighed and balanced.

With such a balanced mind, a love of beauty and ancient Venus energy in their chart, It is no wonder that Librans are seen so very peaceful. In fact, Librans are the diplomats of the zodiacs, the ones that come in and sort things out for us. As an Air ruled Venus sign, their thoughts tend to focus on the positive and in fact, the whole 60s generation of make love not war, came about because some of the most powerful and influential planets, were moving through Libra at the time. We owe the whole peace movement of the 60s to the massive Libran energy that was around at the time.

Librans carry that with them everywhere they go and are the most peaceful and loving of all the signs. They are not overtly emotional about this and do not necessarily go out hugging trees and kissing everyone they meet, for they are an Air sign, not a Water sign. They simply operate their lives in a very balanced, harmonious way that puts an aura of peace and harmony around them. This is not to say that all Librans are living in a state of balanced harmony, but you can be sure that they are striving for it and will feel out of sorts if they do not have it.

If you want to relax after a busy day, find a Libran and fall under their spell for a while.