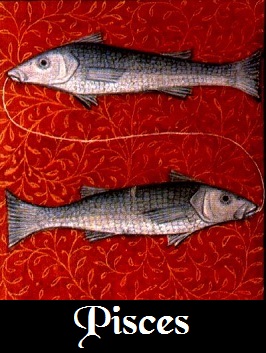 In Pisces we meet the most emotional of the Water signs and also the most intuitive and spiritual. These are the gentle souls of the cosmos, who share a deep spiritual connection to the universe. Of all the signs this has the most religious of associations, but not so much with outward displays of devoutness, rather a deep sense of divinity that has a genuine respect and understanding of the universe and ancient religious concepts, that of understanding that there is a power higher.

Ruled by Neptune, planet of imagination, fantasy and dreams and governed by the constellation of The Fishes, which have strong links to Venus and to Christianity, this is a very romantic, spiritual and idealistic sign. Many Pisceans have a strong psychic ability or sixth sense or just an innate sense of intuition. They are able to read other peoples feelings, to a point where they can feel themselves, what others are feeling. Often this can overwhelm them, as the lines become blurred between feelings that are coming from within and those that are being picking up from others.

With their strong emotional ties, this can sometimes cause a problem for a sensitive Piscean, for sometimes they feel too much and take on others feelings, to a point where they are swamped by them. To guard against this, most Pisceans learn at an early age to put a defensive shield up, otherwise they would literally become overwhelmed. Hopefully, over time, an evolved Piscean will know when to put the shields up and when to lower them, allowing the right people in. 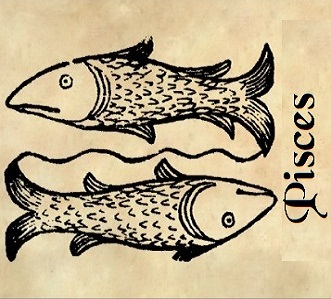 Pisceans have a deep love of tranquillity, beauty and peace and can be mesmerised by music, poetry or just by standing in awe at how beautiful a sunset looks. Their only rival, when it comes to daydreaming and a vivid imagination, is a Cancerean and they only skirt on the edges of the ocean that Pisceans swim in. These are the true romantics of the solar system. Music is something that strikes a deep cord with a Piscean and can literally change their mood. At the end of a long, stressful day, all a Piscean needs to do is put on their favourite music and they are transported.

Pisces is the most mystically inclined of all the signs and Pisceans are seen as dreamy, gentle, creative and intuitive and slightly hypnotic creatures.

Across all times, religions and cultures, the shared symbolism of Venus and The Fishes has brought Pisces its qualities of spirituality, religion, beauty and love. Pisceans have a great sense of mystery and a love illusion. The world of brutal and honest reality is not a world that Pisceans relate to and can cope with too much of. At point and from time to time, they need to escape from reality.

This does not mean that Pisceans walk around in a cloud of love and fantasy all day, they have learnt to adapt to their softer side by becoming very focused. They use their intuition as a lethal and sometimes secret weapon. Ask any of their cosmic mates why they made the choices and decisions they made and they will list you all the reasons why, but for a Piscean they often do not have a reason, other than it felt right. Rather than scoff at this seemingly dangerous way of operating, a Pisceans intuition is usually right on the money and often has deadly accuracy.

The danger of only following their intuition, comes from when it is blinded. A Piscean should never follow their intuition blindly, but they should always use it as their guide. Many Pisceans have Aries or Aquarius energy in their chart, so are likely to be a lot more savvy and streetwise than their calm exterior suggests.

A word from the wise never underestimate a Piscean or assume that this gentle soul is no real competitor, because they will beat you hands down every time. Remember, they have information that the CIA, FBI and MI5 can only dream of having access to.