Saturn is Capricorn s ruling planet. It is said that Saturn was created in the Constellation of Capricorn. After Jupiter, Saturn is the second largest planet in the solar system. Saturn was the Roman god of agriculture, but in Greek mythology he was Cronus, the son of Uranus and Gaia and father of Zeus. Saturn gives his name to Saturday . It is the second largest of the planets (after Jupiter) and the 6th from the Sun.

Although Saturn was known and observed since ancient times, it was not until Galileo observed it with a telescope in 1610, that many of its mysteries were explained. Saturn s image seemed to change, but we have since found out that this is because every few years, the Earth actually passes through the planes of Saturn s rings, distorting and changing our view of this planet.

Saturn was visited by the Voyager space probes, so we know a lot more about this planet than the ancients, or even the Astronomers who discovered its rings in the 18th Century. In 2004 another probe will arrive at Saturn, giving us even more insight into this spectacular planet and its system of Rings and Moons.

Of all the planets, Saturn has the less density. Its gravity is less than that of water. It is very similar to Jupiter, who it shares status with as being the biggest and boldest of all the planets. Like Jupiter, it is made up of 75% hydrogen and 25% helium, with trace amounts of ammonia, methane and water. Like Jupiter, its composition is similar to the primordial Solar Nebula, from which the solar system was formed. Like Jupiter, it has a rocky core and a liquid and gaseous outer layer. All the gaseous giants have a similar makeup and in our charts, it is the signs that are ruled by these giants that are so dominant, Saturn in particular.

One mystery that has yet to be solved is Saturn s luminous hue. Like Jupiter, it emits more energy than it receives, but that doesn t explain this phenomenon. One explanation is that there could be some process such as raining out helium, from deep within the interior.

The one thing that Saturn is famous for, are its rings. They look as though they are continuous bands, but they re actually billions of particulars, all in independent orbits. They range in size from as small as a centimetre, to several metres across. The largest are thought to be up to a kilometre wide. They re also incredibly thin. They re 250,000 kilometres wide, but less than a kilometre thick. If you were able to fly into the rings, you would find that they re mostly empty space, with very little actual matter. If you were to compress it into one ring, it would only be 100 km across, compared to the 250,000 it is, so that s a lot of empty space inbetween.

The other phenomena taking place, is one that is most in keeping with Saturn s influence in our chart. There is a complex interplay going on between some of Saturn s Moons and the ring system. Some of the moons are called shepherding satellites (namely Atlas, Prometheus and Pandora). They re important because their gravitational pull actually keeps the ring system in place. The whole complex is incredibly complex and scientists still do not really understand it.

You can easily see Saturn in the night sky. It isn t as bright as Jupiter, but you can tell that s a planet, because of the lack of twinkle , that a star gives out. Even a small, home telescope will let you see some of the large moons and the rings.

Saturn is ruled over by Cronus, Greek counterpart for the Roman god, Saturn.

Cronus was the father of Zeus and the last of the Titan gods. 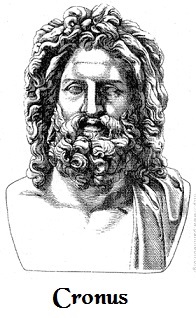 His name means Time . His parents Uranus (Heaven) and Gaea (Earth) mated and produced the first race onto the earth. They were the Titans (earth gods). Uranus was repulsed by his offspring. He thought they were ugly and because they were made of flesh, were imperfect.

He hid them in the depths of the Underworld so that he would never have to see them. Gaea grew angry with her husband and plotted the rescue of her children. She plotted her vengeance and when the time was right, she pulled out a flint blade from her chest and gave it to Cronus, her youngest child and the most astute. That night while he was sleeping, Cronus used the blade (often depicted as a scythe) to cut off Uranus genitals and threw them into the sea. Aside to this story, the genitals rose to the surface of the sea and the foam washed to the shore. It was from this foam that Aphrodite (foam born) arose, to be carried forth on the West Wind).

Cronus then set his brothers and sisters free and took over as ruler of the earth. Cronus was patient and unhurried and during his reign, the whole of Creation took place. His reign was known as the Golden Age . These were times of plenty and abundance. As the god of Time he ruled over the passing of the seasons and the cycle of birth, growth, death, gestation and rebirth in order to grow, die, gestate and be reborn again and so the cycle continued. Cronus ruled the natural order of life.

He was worshiped as the Grim Reaper and as the god that would ensure that the rules and boundaries, past which man could not cross, would be safeguarded.

Yet when it came to himself, he couldn t adhere to these rules. He couldn t accept that the cycle of life also meant that his rule would pass, in order to be reborn. To ensure this cycle did not take place, as his wife Rhea gave birth to each of his children, he swallowed them. That way his rule could go on, unchallenged forever. However, even Cronus, king of all the earth couldn t thwart the natural order.

This went on for 5 years and each year Rhea bore a son or daughter, but by the time she got to the 6th child, she tricked Cronus. She wrapped a stone in cloth and presented it to Cronus as their youngest child, which he promptly swallowed. Rhea safely spirited her youngest child, Zeus away to safety, where he was said to be brought up with Aeogeocerus, the goat we met in the Constellation of Capricorn. Zeus grew to manhood and returned to his father s kingdom with a poisoned cup that he gave to his father to drink. Cronus promptly threw up Zeus brothers and sisters and liberated then. They banded together as the new Olympian gods and eventually overthrew the Titans and their fathers rule to create a new Golden Age, thus perpetuating something that even Cronos couldn t avoid, the cycle of life and the passing of time 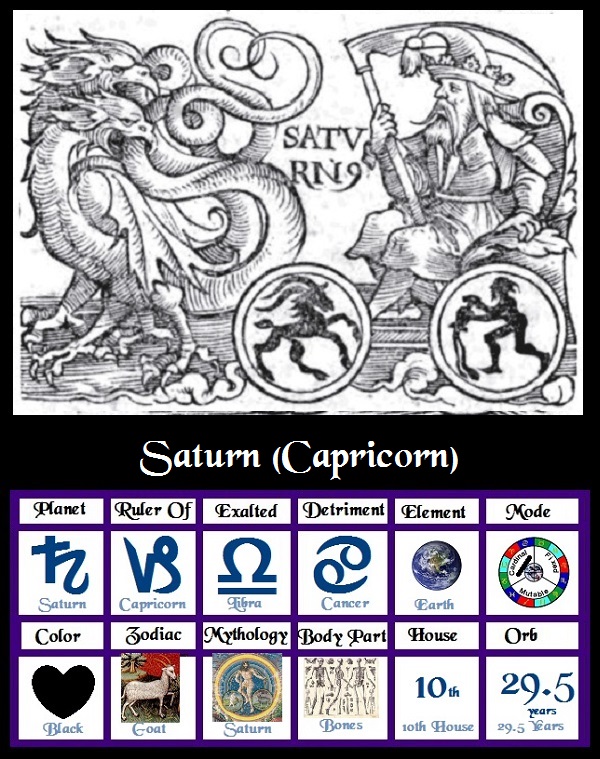 In Capricorn we get one of the most powerful of all the signs. Not outwardly, for most of Capricorn energy takes place within. As a sign it is said to be rigid, patient, enduring and having great strength. Cronus gives Capricorn its sense of watching over the cycle of life and the passage and passing of time. Cronus also ruled the concept that neither man nor nature could cross the boundaries. Saturn, as a planet is spectacular, yet its rings are held together by rigid control and adhering to gravitational principles. Everything about Capricorn energy, right down to its season, says that man, beast and nature itself must bow to the cycle of the seasons.

Capricorn energy is capable of great success and achieving spectacular heights. The Goat is able to climb to the highest peaks and ensure harsh conditions, conditions that other animals could not endure. It is learnt to survive, even as a species. It is also independent and will not be herded. If faced with danger, they separate. So, to Capricorn energy goes the prize because they are able to endure and not give up. Yet this is also the Water Goat, able to go deep within the primordial waters of life to understand its essence.

Capricorn, being a Cardinal sign, initiates and begins the season it is moving into. Here it is winter and a time of scarcity and survival. This energy has to be smart, but also practical. It is earth energy and accomplishes by actions, not words. It has the patience of Time itself and understands the natural order. Yet as the gate bearer for the Winter Season, it is also the guardian of the time of year where nature dies in order to be reborn. As Cronus himself found out, you can not break the natural rules of life. 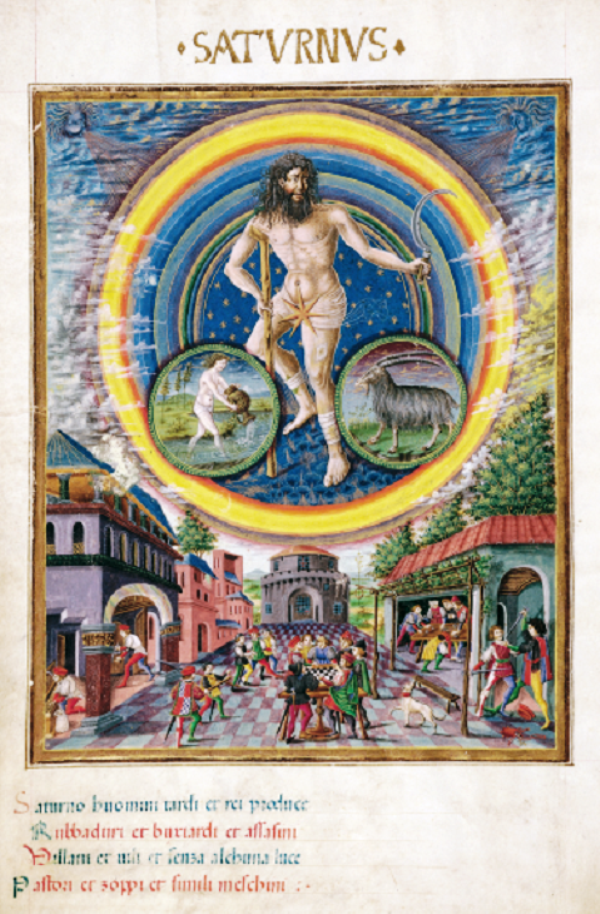