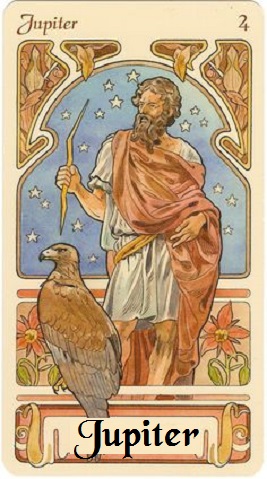 Jupiter is the 5th planet of the Zodiac and by far the largest. It is colossal, 318 times bigger than earth, in fact, Jupiter is twice as large as all the rest of the planets put together.

None other than Zeus, king of the Olympian Gods, has since antiquity, given this celestial giant ruler ship. There is no more fitting deity. When you look into the night sky, Jupiter is the 4th brightest light you see (after the Sun, Moon and Venus) and has been observed since prehistoric times.

Jupiter is a gas planet and as such doesn t have a solid surface. When we look up at Jupiter, we are not seeing the light reflected from the planet itself, rather the clouds that cover it. Jupiter is made up of 90% hydrogen and 10% helium. Its make up (methane, water, ammonia and rock ) are almost identical in composition to the primordial Solar Nebula , thought to be origins of the entire solar system. The only other planet that has this composition is Saturn and these two planets rule our very lives.

Jupiters Great Red Spot has only been visible to man for 300 years, with the advent of the telescope. This Great Red Spot is big enough to hold two earths. This is in fact an area of High Pressure cloud formation. Scientists still do not know why it is existed for so long or what is causing it. It is not a physical landmark, rather a meteorological one.

Jupiter expends more energy out, than it receives in from the Sun. In fact, Jupiter itself has the characteristics of a Sun, however, the heat and energy it expends is not from nuclear fusion like the Sun, rather from something that is called the Kelvin-Helmholtz mechanism , which is the slow gravitational compression of the planet. Therefore, it never gets hot enough to cause nuclear reactions.

Jupiter is as large as a gas planet can possibly get. If any more matter were added, it would simply be compressed by gravity. It would get more dense , but not bigger. To become a star from its internal heat source, Jupiter would have to be 80 times larger than it is now to produce enough heat to manifest the nuclear heat needed to become a star. As this isn t possible, then it will always remain a planet, even though it has the potential to be a star in its own right. You may as well be talking about Zeus himself.

Jupiters magnetic field is much stronger than Earths, with a magnetosphere that extends more than 650 million kilometres (further than Saturn), yet its field is oblong in shape and although it extends so far out towards the other planets, the field towards the Sun only extends a few million kilometres. Jupiter, mighty as it is, still concedes authority to the Sun. This magnetic field makes human journeys to Jupiter dangerous. They contain high levels of energetic particles (radiation), far higher than those in the Van Allen belts around earth. It would be instantly fatal to an unprotected human being.

Jupiter also has rings, like Saturn, but these are so much fainter that they were only discovered by determination . When the Voyager 1 scientists insisted, after travelling 1 billion kilometres that it was at least worth a nosey to see if they could see if any rings existed. Everyone thought this was impossible, in fact the chances for finding anything were given as nil . But find them they did. It was a major scientific coup.

In July 1994, the comet Shoemaker-Levy 9 collided with Jupiter, giving scientists on earth a spectacular view of the effects of a deep space collision. Just as Prometheus allowed himself to be chained to a rock for 30 years in order to bring us knowledge, so to does Jupiter itself continue to do so, right down into the 21st Century.

Jupiter has 28 satellites, all of them named after people who figure strongly in Zeus life, most are the names of his many lovers.

After reading about Jupiter, how could any one, but the ruler of the Gods, possibly rule over this powerful planet.

Zeus was one of three brothers, who overthrew their father, Cronos. Zeus 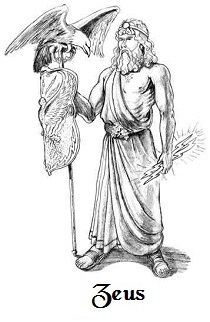 and his brothers took part in an epic battle to overthrow the old order , symbolised by their father Cronos the last of the Titans. We meet Cronos in the sign of Capricorn. The Olympians were victorious and after the battle, ruler ship of the sea, skies and underworld were given to the victorious, brothers Hades, Zeus and Poseidon. They drew lots and Hades received Tartarus, the underworld. Zeus got the skies and Poseidon the seas. The earth was given ruler ship to all. Cronus had imprisoned the Cyclops and the hundred handed ones in Tartarus. Zeus released them and in gratitude they gave Zeus the thunderbolt, Poseidon the trident and Hades the mask of invisibility.

Zeus, however, claimed dominance over his brothers. The Greeks called him All Father . Cronos was told in a prophecy that one of his sons would overthrow him and take over his place. To guard against this happening, as each of his children were born, Cronos snatched them from his wife (Rhea) and swallowed them before they could open their eyes.

Naturally Rhea wasn t very happy about this, so when she knew that her sixth child was on the way (Zeus) she bore him in secret and gave Cronos a stone to swallow instead. Zeus grew to manhood out of sight and when the time came, he prepared a potion and disguised as a cup bearer gave it to Cronos to drink. This made Cronos violently sick and Zeus five brothers and sisters were disgorged from his mouth. They were obviously pleased about this and swore eternal gratitude and allegiance to Zeus. Together they overthrew their father s rule.

Zeus made Mount Olympus his home and established a hierarchy of gods who obeyed his ultimate law. Zeus was a dictator and although the other gods swore allegiance, there is no doubting that this was total law. He had a volatile, fiery and prolific spirit and when roused he would express this with the power he possessed in his thunder and lightening bolts. He also used his powers to pursue his many lovers. Of all the gods he is the most virile, but also without ethics. It didn t matter whether the object of his desire was married, part of his family, or just plain not interested. If he wanted, he got. From his lovers he produced many children, including Athene (goddess of Justice), Dike (goddess of natural law), Moira (goddess of fate) and the nine muses. His wife Hera (also his sister), was the goddess of childbirth. Zeus dispensed both good and evil according to the law, the law he himself set down. He is also the protector of man. 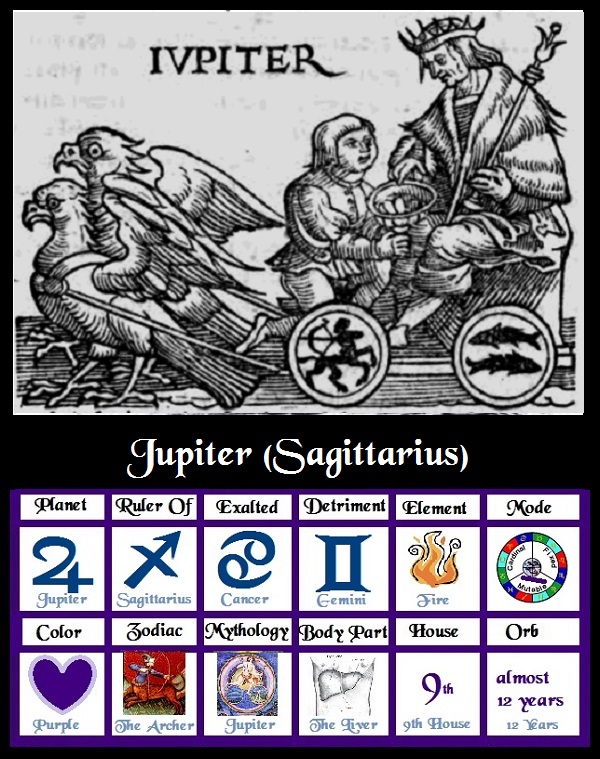 In the constellation of Sagittarius, we meet the Archer . The very name Sagittarius comes from the Latin word for arrow . Therefore, Sagittarius has always been a sign associated with shooting for far off goals. You do not shoot an arrow down into the ground, you shoot it at a distant target. Yet here the meaning of arrow is not in the concept of warfare, rather the concept of knowledge . In both Chiron and Prometheus we find the concept of learning, teaching, wisdom and enlightenment. Sagittarius rules the 9th House of the zodiac, this is the house the ancients refer to as the house of distant travel and the higher mind . It is not hard to figure out where they got that title. Sagittarius energy is about things that are bigger than the individual. It is about finding out your place in the world and not being content with the way things are. There is a need to know, not just for ourselves, but to pass on to others. Most Sagittarians travel, with a life long urge to discover and learn about the world.

In Sagittarius we also meet Jupiter and Zeus. The words that explain Jupiter, the planet, and Zeus, the god, are interchangeable. Big, bold, expansive, generous and larger than life. Cross Zeus and you will suffer as Prometheus soon found out, get too close to Jupiter and its radiation belt will fry you to a crisp.

Zeus fathered most of the Olympian gods. There s hardly a deity that does not have Zeus as a father, or is not at least closely related. There is hardly a Greek myth that does not have Zeus as an integral player. In the 21st Century, Jupiter, larger than all the rest of the planets put together, then doubled, is still to this day, a central figure with 28 moons (just the known ones) circling him, all with names of real life players in Zeus story.

In Astrology, Jupiter is the ruler of Sagittarius, but it is also the planet of luck and expansion. Is it any wonder with such a powerful planet and such a powerful god?

Sagittarian energy is fire energy in every sense of the word. On a spiritual level, it represents our inner fire, the one that Prometheus fought so valiantly for us to acquire. But also the physical fire to keep us warm. 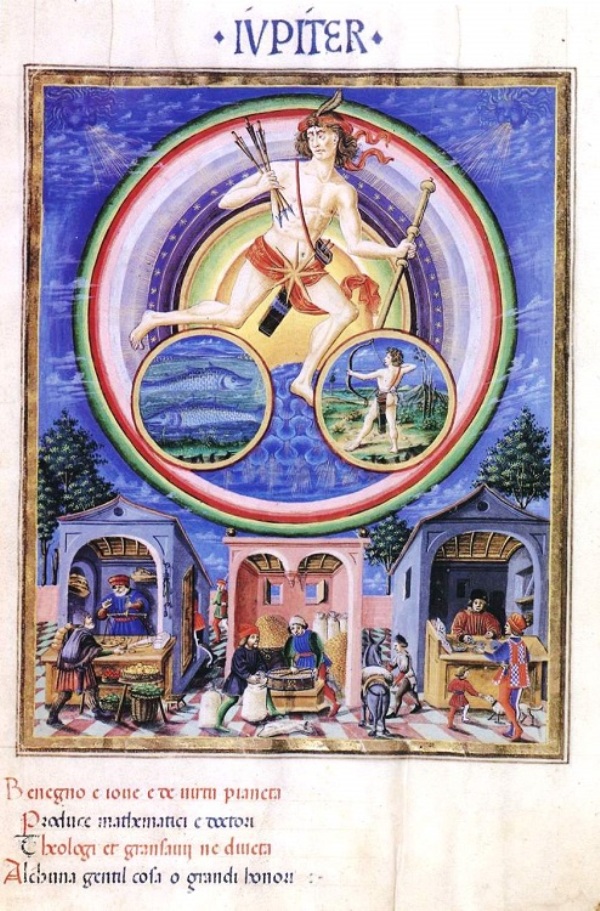