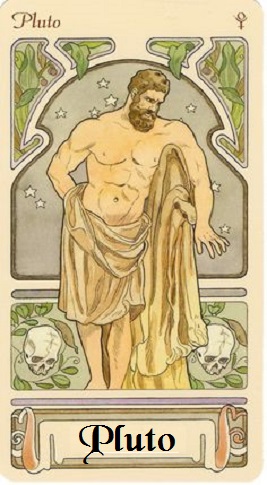 Until less than 100 years ago, Mars ruled Scorpio. There are obviously too many signs for the number of planets, especially in ancient times when there were only 7 known heavenly bodies. Mars was given ruler ship of Scorpio. One reason for this is that at the heart of the constellation of Scorpio lies a brilliant red star called Antares. Antares was Ares (ruler of Mars) lieutenant. The Greeks believed the he was the anti Ares or anti hero .

Now Pluto rules Scorpio. It is important to note that the intellectuals and scientists that found and named Pluto are no different than their ancient counterparts, for there is no more fitting a name for this planet, nor could it rule a more fitting sign.

Pluto was discovered in error in 1930. Scientists, at the time, were looking for a 9th planet that they thought existed. There were two reasons they thought there was another planet, both of them wrong. The first was something called Bodes Law . Bodes Law was a mathematical calculation whereby the position of an unknown planet could be calculated by an equation that held true for the known planets. Using this they calculated where this mystery planet should be.

The other reason was the behaviour of Neptune. It was thought its movements depicted the gravitational pull of an unseen planet.

We now know that Bode s Law is nothing but a coincidence and has no scientific value. Since Neptune and Uranus have been observed by deep space probes, these giant gaseous planets have been shown to be much larger than previously thought, therefore explaining away Neptune s behaviour.

But Percival Lowall, at the Lowall Observatory in Arizona, didn t know these assumptions (it would be many years before Bodes Law was disproved) were wrong and his team of scientists trained their telescopes on the area of sky, these now erroneous presumptions pointed to, as being the most likely place to find the missing planet. That s exactly where Pluto was found. The reasons for looking at that area of the sky were totally wrong, but they found the most important astronomical find of the 20th Century.

When scientists finally named this planet, after lots of deliberation they chose Pluto. Pluto was a name in keeping with the rest of the planets, in that it was named after Ancient Gods & Goddesses of ancient Rome or Greece. It also honoured Percival Lowall, who s played such an important role in discovering Pluto, PL being the first two letters of Pluto and his initials.

Pluto, the planet, is in the darkest part of the solar system. It is both the smallest and the most far from the Sun, receiving little light and is in perpetual darkness. It is the only planet in the solar system that hasn t been visited by deep space probes. The only pictures we have of Pluto are fuzzy computer enhanced images. Even the Hubble Space telescope can t see it clearly. We know that it has at least one moon, but even that wasn t discovered until 1978. Until a space probe reaches that far out into the solar system, Pluto s mysteries will remain hidden. Just like the Scorpion.

Pluto is the Roman name for the Greek God, Hades, Lord of the Underworld. 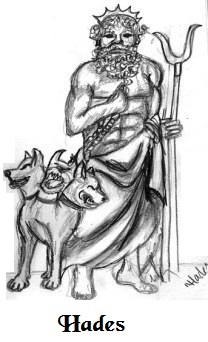 Before the age of the Olympian Gods, an age that gave birth to the astronomy and mythology that were the parents of astrology, Titans ruled the world. Zeus and his brothers took part in an epic battle to overthrow the old order , symbolised by their father Cronos the last of the Titans. Olympians were victorious and after the battle, ruler ship of the sea, skies and underworld were given to the victorious brothers Hades, Zeus and Poseidon. They drew lots and Hades received Tartarus, the underworld. Zeus got the skies and Poseidon the seas. The earth was given ruler ship to all. Cronus had imprisoned the Cyclops and the hundred handed ones in Tartarus. Zeus released them and in gratitude gave Zeus the thunderbolt, Poseidon the trident and Hades the mask of invisibility. It is this mask that enabled Hades to walk upon the earth and not be recognised. One of the most powerful stories in Greek mythology is the rape of Persephone (see Virgo). Wearing his mask of invisibility, while thundering through the land in his chariot he came upon Persephone, swooped her into the chariot and through a chasm that opened in the earth, carried her into the underworld to be his Queen.

The underworld was a place that all souls went upon death. The ferryman carried them across the river Styx. The relatives of the dead placed a coin under the tongue of the body to pay for the journey into the after life. Penniless ghosts had to wait for eternity on the other side.

There is a saying in pop psychology that harks back to this superstition, when dealing with grief it is said that you have to pay your penny . In other words, you have to submit to moving into the underworld, a place you need to go to in order to work through your sorrow, to complete the death process and come out healed the other side. By avoiding dealing with grief, you are left like the penniless ghosts on the other side. Thus, it is always better to pay your penny and move through the process.

Very few mortals ever ventured into the Underworld, but one of the Heroes that did is one of the most endearing in Greek Mythology, Orpheus. Orpheus was the most famous poet and musician who ever lived. Apollo himself gifted him his lyre and the Muses taught him to use it. He took it with him when he went as one of Jason s Argonauts on his epic quest, where his music got them out of many scrapes. It is said that the earth itself danced to his music. His wife Eurydice died after being bitten by a snake while trying to ward off the sexual advances of Aristaeus. Orpheus boldly went down to Tartarus where his music charmed the ferryman, Cerebus, the three headed dog and it is even said that his music tamed and soothed the savage heart of Hades himself. Hades said that Eurydice could return with Orpheus under one condition, that he must not look back to see if his wife was following until they were back under the light of the Sun. At the last moment, just as Orpheus could see the sun ahead, he turned to see if Eurydice was following. She immediately turned to stone and was lost to him forever. 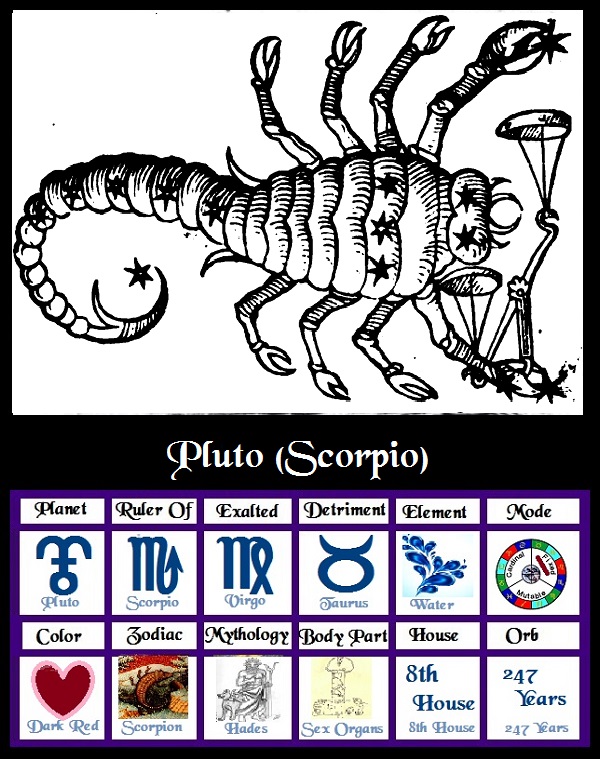 In Scorpio we find one of the most mysterious and misunderstood of signs. Scorpio does not operate in the light. Everything about Scorpio is hidden or dark. From ancient times the Scorpion has been associated with the hidden aspects of life. It is Scorpios role to see the things that the rest of us miss.

Much of what happens in Scorpio is unseen and unknown. It has always been the things that happen out of sight that terrifies us the most. In Scorpio, we find that one of the most prevalent themes is that of death. Death of a season, Hades Lord or Death. But if you see it just as a sign of endings, you fail to see its true nature. For Scorpio is the sign that encompasses triumph over the dark. We saw Orpheus go where no man had gone and the only thing that let him down was his own self doubt. That Pluto itself was even discovered is a true testament to man s quest to search for something beyond himself. Just as the ancient farmer looked deep into his soil and watched the decaying leaves return to the earth, he did not see death, he saw the promise of new life.

Scorpio stands at the brink of winter and is the sign that will lead us into the darker days ahead. Unless we are to become like those lost ghosts standing penniless on the banks of the river Styx, we must submit to the continuous flow and ebb of life, death and ultimate rejuvenation.

Scorpio, being the 8th sign of the zodiac, rules the 8th house. This is a house said to rule sex, death and transformation. Without this energy we would never progress, either individually or as a race. When Pluto is active in our charts, it is always a time of cutting away the old in order to make way for the new. When giving advice to anyone who has planets moving through this house, it is one of letting go of old outmoded ways, just as the leaves must return to the soil, so must aspects of our lives.

Scorpio is a dark sign. Everything about it from the Scorpion, its place in the Milky Way, right down to the planet Pluto itself, spinning so far out into space that it is in perpetual darkness. This is where Scorpio has received a bad rap in the past. Just as we need Sagittarian energy to lift our eyes to Olympian heights to see into the heavens, so do we need Scorpio energy to look, for us, into the deeper recesses of life.

No sign is good or bad, purely one link in a chain that together makes a whole. Scorpion s role in the cycle of life is no more or less important than that of any other of the signs.

Like all water signs, Scorpions are ruled by their emotions. 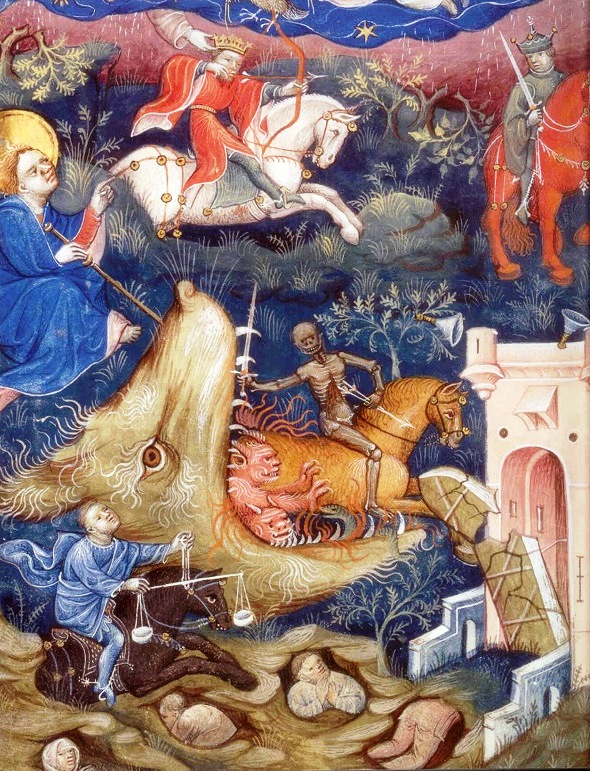