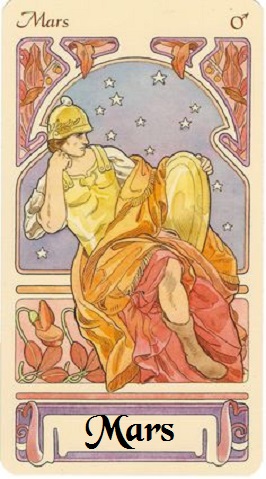 Mars is the ruling planet of Aries. It has a cycle of 687 days, spending approximately 6 weeks to 2 months in each sign.

Blood Red in colour it has always been linked with warfare, fighting and battle. Red is the colour of passion, fire and of the fighting spirit, all of which are associated with Aries energy.

Mars has been visible to the naked eye since pre historic times and the month of March, the month the Sun moves into Aries, gets its name from the planet Mars.

In modern times we can stand back and see Mars for what it is. A planet not dissimilar to our own. The 4th planet out from the Sun and the 7th largest planet in the solar system, Mars has long been the planet of myth. It is the stuff science fiction stories are made of. The concept of Martians is one we all know. Even today we have our own Myths and it is from this planet that stories of extraterrestrial life often come.

So in ancient and modern times Mars has been a planet of adventure and of the possibility of something different. It is the thought of the impossible somehow being possible. How many people over the years have had dreams of going to Mars. Movies are made about it, books are written, little boys (and girls) have dreamt of going to Mars. All these aspects of adventure, exploration and wild fantasies are all qualities of Aries.

Ares, God of War, is the ruling deity of Mars and therefore of Aries. 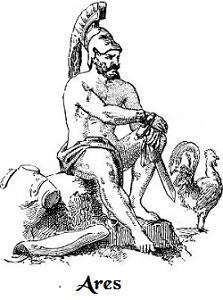 In the ancient world Mars was Ares. Ares was actually a bit of an unlovable character, not too popular amongst the other Gods. Ares (pronounced the same was Aries the sign, but spelt without the i ) loved battle, not for the strategic side of battle or for the cause. He liked battle for its own sake. Give me blood, give me glory would have been his battle cry. It was the act of war and the excitement it brought that was his motivation. Thus, Ares personifies the human concept of aggression and passion.

In mythology, Ares rode a chariot pulled by two horses, one black, one white. They were called Deimos (Fear) and Phobos (Terror). In other myths they are known as his sons. Whether they were his horses or sons, they accompanied him into battle. He lived for the thrill of battle and the smell of blood.

There is a soft spot to Ares though. He was in lust/love with Aphrodite, goddess of beauty, love and desire. Even though Aphrodite was married, Ares was so seduced by her charms that he gladly suffered humiliation at the hands of the other Gods, rather than give up his illicit love affair.

Most of the other Gods, especially Zeus and Athene, weren t great fans of Ares, they thought he was too brutish and unrefined. Aphrodite fell in love with his vigour and as most girls do, fell for a man in uniform, for Ares was a warrior. Her weak husband, Hephaistos (Smith to the Gods) did not stand a change against the virility of Ares. 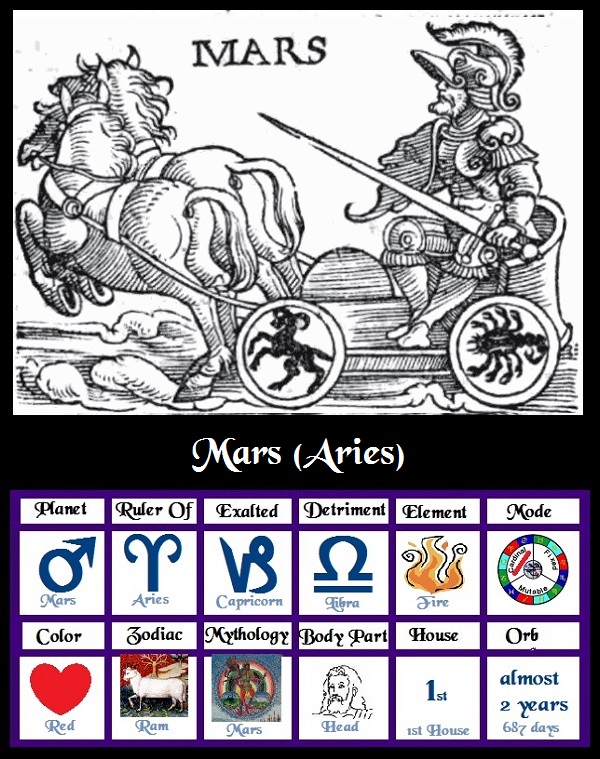 When he found out about his wife s infidelity, he used his gifts to forge a net so fine, it was invisible, then he tricked his wife. He said he was going out of town on business, knowing that she would send for Ares. That s exactly what she did, but unbeknownst to the lovers, he slipped back home, threw the net over them while they were laying naked on a couch in the act of love. Trapped, the lovers had to wait while Hephaistos summonded all the Gods to come and witness their shame. Instead of being shamed, Ares ego was pumped up, by being seen in the embrace of the most beautiful goddess in the world. If Aprhodite was the goddess of love and he had seduced her, then that made him the worlds greatest lover and he didn t care how many people knew that!

Ares and Aprhodite eventually had a daughter called Harmonia, a name that means the balancing between love and strife. Ares and Aries energy is about conquest, whether it is love or an epic quest.

In the game of love, Ares (and Aries) fight on for the object of their passion. Ares love for Aphrodite survived their embarrassment and eventually they had a daughter called Harmonia. It is said that she represents, being the offspring of strife and love, a balance between the two.

Aries is like the proverbial Ram. They butt their way into situations so they can remain number one. Not content to wait for life, they go after what they want. They are fiery like the planet Mars. They are passionate, warlike and like Ares and they are instigators, inventors, planners or forward thinkers, just like the energy of the time of their birth. They are also lovers, not just romantically but of life itself.

As a Cardinal sign, they are the ones who come up with the ideas that inspire and motivate the rest of us. Aries very rarely finish what they start, but that s not their role, that s for other signs to do. Aries energy relies on having a good team around them, that can follow through on the practical details, while they are free to develop even better ideas. Aries, therefore, are inspirational leaders, inventors and inspire passion and a fighting spirit in all of us.

When any planet moves through Aries or the 1st House that it rules, is filtered down to us through this rich Arian energy. 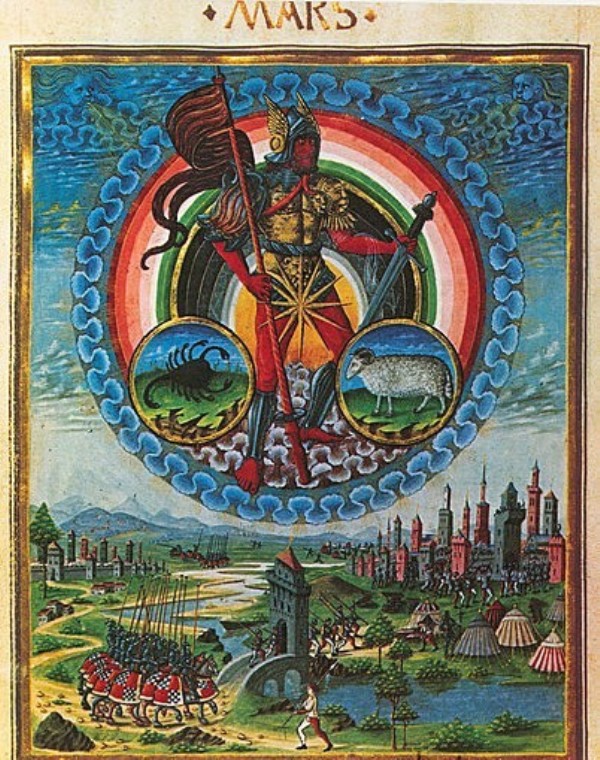