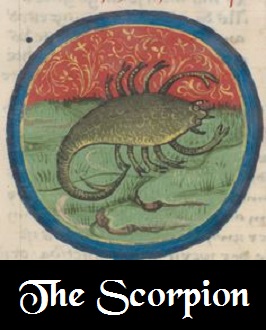 When the ancients looked up into the sky, at one of the darkest parts of the Milky Way they saw the shape of a Scorpion, as if emerging from a crack, its stinger raised, ready to attack. In the ancient world it was thought that the dark crack from which the Scorpion was seen to emerge from, was an opening into the Underworld. The Milky Way to the ancients was not just a host of stars, it was the seed ground, where souls originated. It was from the Milky Way that the spirit of man descended into the material realm.

It was said that the Scorpion was placed in the skies as a reward for slaying Orion as he was about to slay Taurus, the Bull. Artemis, who we met in Cancer, was the Goddess of the Moon, a hunter. She had brought the Scorpion out to kill Orion (Scorpio is next to Orion the hunter). Some say that Orion had used unbecoming force against her, others that Orion was killed because he bragged that he was a superior hunter to Artemis. Artemis is a Goddess that protects animals against wanton destruction and condones hunting only for food, not the glory of the hunt. Orion revelled in the glory. Hence, Artemis is the protector of animals and the Goddess that ensures the natural balance in nature. Without Artemis, the animals of the world would not have survived. 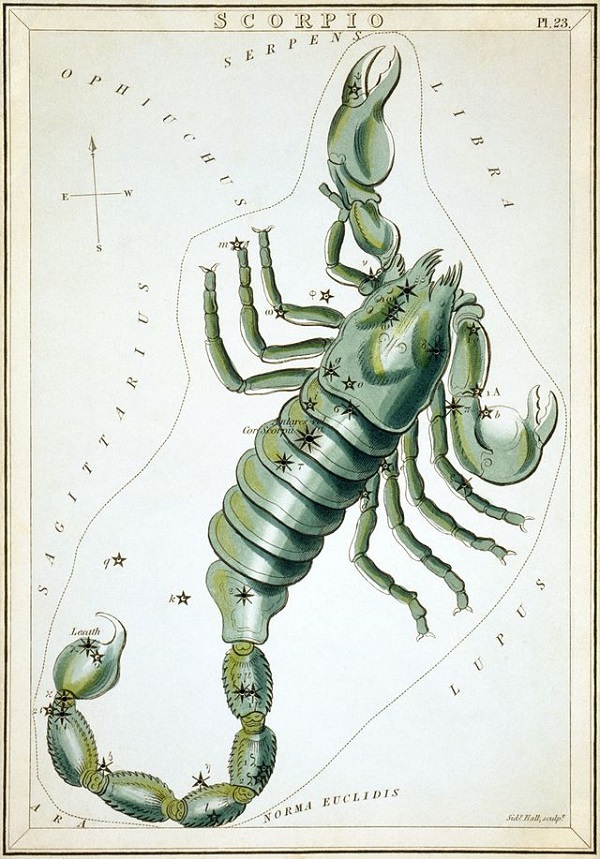 This epic battle between Orion and the Scorpion has been played out in the skies of millenniums. When Orion is in the sky the Scorpion is below the horizon. When the Scorpion rises, Orion disappears beneath the earth, to its death.

Of all the stories surrounding Orion the one that gives Scorpio ruler ship over sex and passion, is that of Eos.

The Constellation of Scorpio is one of the most beautiful and striking in the heavens. In the heart of Scorpius is a brilliant red star, Antares. In ancient times Scorpio was the largest of the signs, as the Greeks did not recognise Libra as a sign and assigned the stars in the constellation of Libra to the claws of the Scorpion.

As a creature Scorpions live in cracks, crevices, holes, in fact anywhere that is dark, hidden and secluded. They are a nocturnal animal, preferring dark to light. Hence, Scorpio has always been a sign associated with the darker, hidden or secret side of life. Secrecy, evil and the underworld are all associated with Scorpio. Scorpions are one of the most ancient creatures on the planet. Fossils have been found dating back over 400 million years. They are predators who hunt at night and kill with their sting. 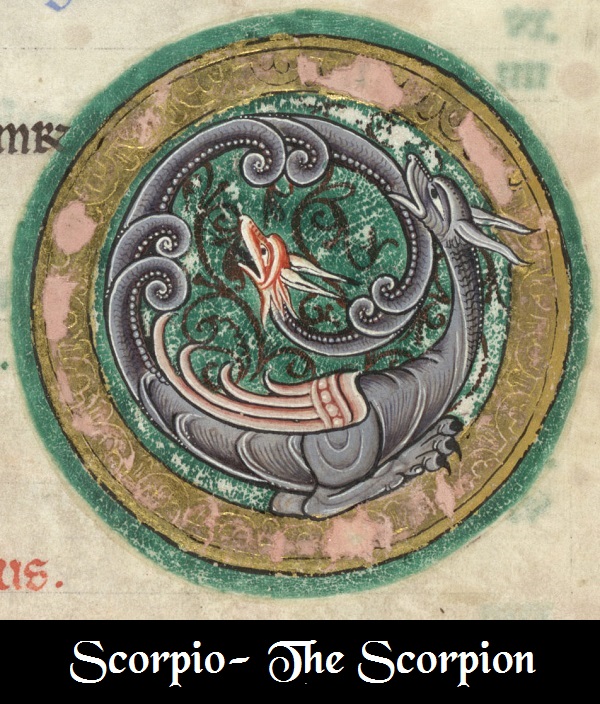 All species, no matter how mild, can cause terrible pain if they bite, with some species being lethal. It is said that if a Scorpion is surrounded by fire it will even sting itself to death. Like the Crab, Scorpions rely on sensors to detect prey, small hair like organs on their tail, legs and pincers. Like the Crab their first defence is also to hide. Scorpions are not naturally aggressive and attack only in self defence or for food. When mating they perform a dance like ritual called the promenade a deux. The courting couple grip each other with their claws and move backwards and forwards (as if dancing) until a suitable spot is found.

The Scorpion has been central to both death and sexual rituals right back into the deepest past of many cultures, especially the Egyptians.

In terms of symbolism, the Scorpion is a symbol of wisdom, self destruction and death. The Egyptians maintained that when the Sun entered the sign of Scorpio it marked the beginning of a period ruled by Typhon, a destroying demon or devil.

It was he that devoured the Sun on its journey into winter.

Even the season of Scorpio personifies this dark aspect. When the Sun passes through the Constellation of Scorpio, the year itself begins its journey into its darkest phase. It is the beginning of the long, dark days of winter.

One aspect of the Scorpion nature is said to be that of self sabotage. There is a story that illustrates this in a light hearted but apt way. The story goes that a Scorpion came to a river, but it was too deep to cross. He asked a frog he saw sitting on the bank to carry him across on his back. The frog said no, you will sting me and I will die. The Scorpion said why would I do that, then I could not get across the river? The frog was convinced, so agreed to carry the Scorpion across the river. Half way across the Scorpion stung the frog. The frog said why did you do that, now we are both going to die. The Scorpion replied I am a Scorpion, I can not help it, it is what I do.