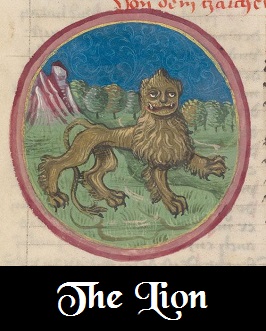 In the constellation of Leo, we meet the Nemean Lion that Hercules encountered in one of the most well known of all his 12 tasks. There were no lions in Greece, at the time of the Roman Empire. It was assumed that they did not exist. In ancient times, lions did roam the countryside. However, by Roman times, they had been hunted into extinction.

Hercules was the son of Zeus by a mortal lover by the name of Alcmene. As usual, Zeus long suffering wife was jealous of Hercules and of her husbands adultery and so submitted Hercules to terrible ordeals. At one point she drove him mad and in that state he murdered his own wife and children. To atone for his sins he went to the oracle at Delphi who ordered that he must perform twelve, almost impossible tasks in order to redeem himself.

Thus he set about to do what he could and take responsibility for his actions, regardless of what or who caused him to act that way. The most famous of these was the slaying of the Nemean Lion, an enormous beast that was terrorising the neighbourhood and depopulating it of people. It could not be killed because its hide was impenetrable to iron, bronze and stone. 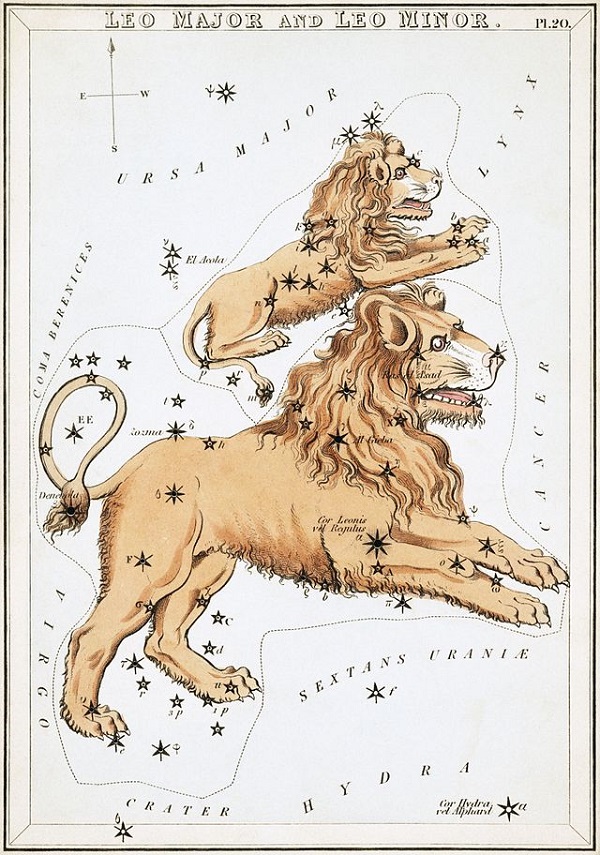 He tracked the lion down, covered in blood from that days kill. He first shot arrows into his hide, but they simply bounced off. His sword simply bent and his club split on contact with the lions head. In the end, Hercules used his intellect. He strung a net over the entrance to the cave, and then when the lion was asleep, crept to the back of the cave. He then frightened the beast who ran at the entrance to the cave, only to be trapped within the net. Then with his bare hands Hercules strangled the lion and killed it. With its own claw, he ripped the skin from the carcase and used its skin as protection for himself, making him as invincible as the lion itself.

The story of Nemean Lion is one of accepting responsibility for your own actions, despite what course, but triumphing by using your own skills, not any outside aid. This is true courage. A similar story is found in other cultures, particularly in that of Gilgamesh, the Babylonian Sun God.

The lion is the most proud and passionate of all the beasts. It is the king of the beasts, just as the Sun is king of the solar system. Since ancient times, long before the Greeks, the lion has been a symbol of masculine power, rulership and divinity. Even to this day, buildings of importance are adorned with lions either side of the door, or protecting the gates.

On the Ninevite cylinders, Leo the Lion is depicted in conflict with a bull, this is an ancient and archetypal symbol and represents the victory of light (Sun) over darkness (Moon). In the predawn of civilisation, religion was lunar based and feminine. At some point that switched to male domination and solar based religion.

The Egyptian King Necepsos and his philosopher Petosiris preached that at the time of creation the Sun rose near Denebola, in the Lions tail, a group of stars within the Constellation of Leo. The great Sphinx itself is said to be sculptured with Leos body and the head from the adjacent constellation of Virgo. There is a reference to Leo on an inscription on the walls of the Ramesseum at Thebes.

Throughout the aged, the Constellation of Leo the Lion has always been connected with the Sun. 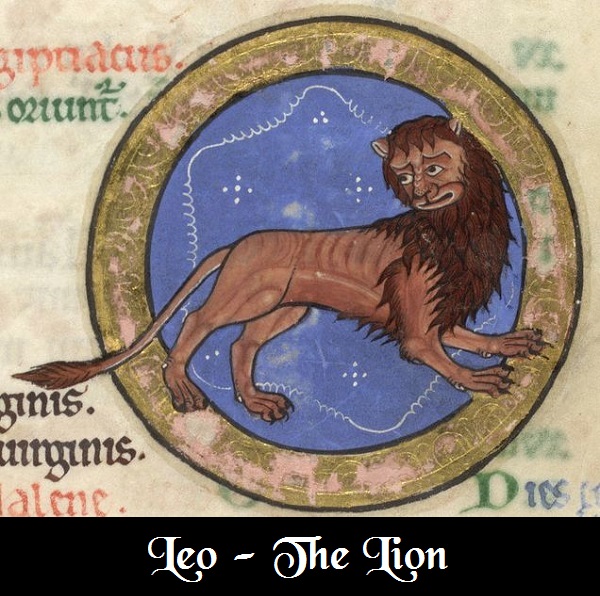 One story says that the Lion lived on the Moon and that he descended to earth one day as a shooting star. The Romans depicted the Lion as conquering death itself. The Chinese thought the lion took on human form and fought alongside them in their wars, only returning to the mount of Buddha Wen Shu, when victory was won. In Buddhism, the lion is the defender of the law. Hindu beliefs say that he is the destroyer of demons.

The Sun moves through the Constellation of Leo at the height of summer and represents the abundant generosity of nature and life itself.

Much of the characteristics of Leo, come from the beast itself. The lion is the most majestic of beasts and in the animal kingdom he reigns supreme, but it is within its own environment that we find its characteristics. Lions are large, strong and fearless as well as being the deadliest of all the animal kingdom. Even humans bow down to its majesty.

Lions are social animals. They are also family orientated, living in prides which are made up of related females, their cubs and one or two males.

On the other hand, the females are lethal hunters. With powerful jaws, claws, teeth and muscles. They can bring down an animal that is larger than themselves, especially when the girls of the pride gang up together.

The male lions spend a lot of time making sure that they look good, for one of the main drives within the Lion family is that of procreation. A male lion leaves the pride when it is around 3 years of age. Once they reach mating age they are seen as a threat by the existing adult males, so leave before this happens, to establish their own pride. Once they find fertile females, a male lion will allow one or two males in, not out of good will but to ensure the chance of reproducing. For reproduction is what Lions are all about and successful reproduction is dependent on the males ability to hold the pride together. All this sounds excessive, until you realise that it is estimated that it takes 3,000 copulations to produce one cub that survives infancy.