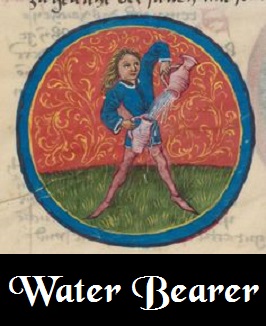 Aquarius has always been linked with Ganymede, who was the first mortal to become immortal. He was taken to Mount Olympus to become Cup Bearer for the gods. This was a privilege that had never been given to a mortal before. When we see a symbol for the sign of Aquarius, we see a water bearer . This is in fact Ganymede, pouring nectar for the gods.

So what exulted deed did Ganymede perform, that gave him such honours? He did nothing, it was his beauty. Ganymede was the son of Tros, King of Troy. He was the most beautiful youth in the world and even Zeus, the most heterosexual of all the gods, fell for his charms. Some say that Zeus took Ganymede to Olympus as an eagle for sexual reasons, others that all the Gods were smitten with his looks. In any case, he upsurged Hebe, daughter of Hera, Zeus long suffering wife. They fought about this until Zeus ended the argument by taking him up into the heavens, where he stayed.

In modern astrology, Aquarius rules the 11th House, which is said to be that of Hopes and Wishes and also Ideals and Aspirations . Where that comes from is that the glyph for Aquarius, is the Egyptian sign for water above and below . Therefore, Aquarius is said to symbolise the realm where the invisible waters of heaven pour down onto mankind, in the same way that a soul is poured into a human body. What is above is immortal and what comes from below is mortal and the water of Aquarius are said to transcend both, just as Ganymede did. When we tap into this flow our ideas, thoughts and requests flow up into the heavens where the Gods can look on them favourably. 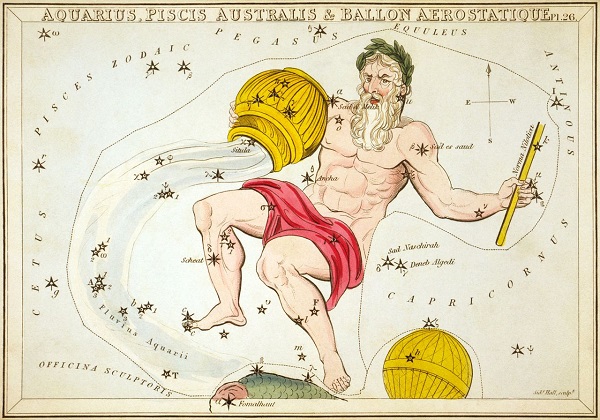 Because Ganymede was the first mortal to gain immortality, he was the first man to understand the waters above and bring them down to others. This is the modern notion of ideals .

The Constellation of Aquarius lays West of Pisces. It is one of the oldest of all the constellations and ever since ancient Babylonian times is depicted as a man or boy carrying a jug or urn, from which he pours water or liquid of some kind. Water carrying was an important occupation in ancient time. When visitors arrived, they were offered water to refresh themselves. It was done, not in servitude, but out of respect and hospitality. Water carriers also waited on banquet tables on earth and in the celestial realm. They had to be trustworthy, as they were often privy to confidential information. In the case of Ganymedes, he was privy to the conversations taking place between the Gods and Goddesses, as they discussed their plans for mankind. He was often called on to carry information and instructions from one God to another, or to fly down over the earth in the form of an Eagle and bring back information.

Some say that the Aquarian urn is the cauldron of Cerridwen, a Celtic goddess. One sip from this cauldron was said to provide you with infinite knowledge and the power of prophecy. The Egyptians associated their god Nut with this constellation and saw it as milk pouring from her breasts and the waters from her womb. In Hebrew, it was Delilah (Her Water pitcher). Aquarius and Ganymede have been seen as one and the same entity and together, they are seen to bring life giving rain to the earth. 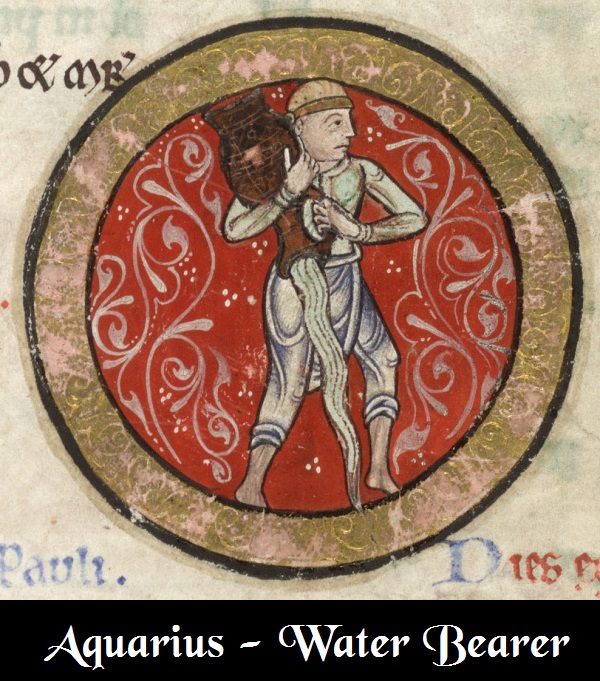 Aquarius is the central figure in a part of the sky that the ancients called The Sea. In fact it was said that Aquarius ruled this sea. In this great celestial ocean we find Capricornus the Sea Goat , Cetus The Whale , Delphinus the Dolphin , Eridanus, the Great River , Hydra the Water Snake , Pisces the Fishes and the Southern Fish all members of the water elements. Along with others, these make up a part of the sky that is called the Upper Waters and is said to be the source of all life. It is through this region that the Sun passed through in the rainy season of each year.

The Babylonians also called this the Sea and saw it as populated by ocean creatures such as the Dolphin, Water Goat and the Fishes.

Again, they saw Aquarius as being in control. In another link to the number 11, the 11th month of each year was called Shabatu or Curse Rain (January February each year). Even in the bible the epic account of the great Deluge (which features in the myths of every civilisation) is in the 11th Book. In fact, each of the books of the old bible relate numerically to the zodiac signs.

February, the month that the Sun moves through Aquarius, comes from the word februare , which means to cleanse . In ancient times this was the time of year that people cleaned their houses, farms and barns after the long, dark winter.