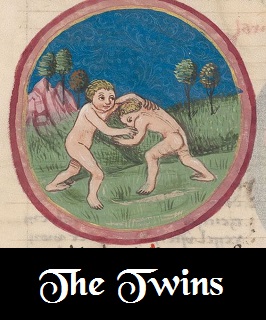 The outline in the sky of the constellation of Gemini is that of a perfect rectangle, each vertical side represents a twin, for Gemini is the sign of The Twins. Alpha Gemini (Castor) is at the northern west head and Beta Gemini (Pollux) is on the southern east.

In Gemini we do not meet an animal form, as we did in Aries and Taurus. Here we meet the Twins of Greek Mythology, Castor and Pollux. The fact that this sign has a human symbol reflects the fact that we now move away from bestial energy, into one of the intellectual mind. This is one of Geminis most famous facets.

Castor and Polluxs mother, Leda, was raped by Zeus (a busy guy) on her wedding night. She carried inside her two egg sacks. One divine, the children of Zeus, the other human. From the immortal sack, Pollux and his sister Helen, of Troy, were born, while from the human sack, Castor and another sister Clytemnestra were born. 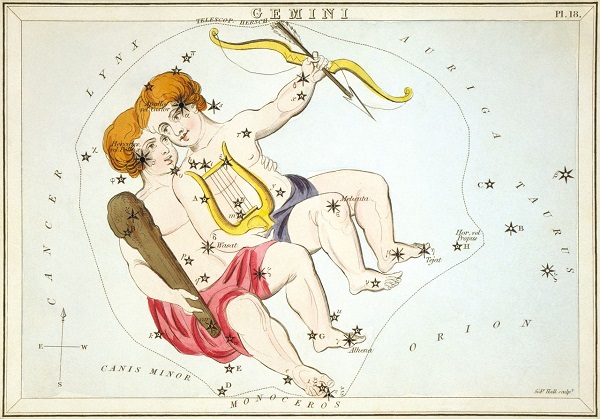 Castor and Pollux, one mortal one divine, became inseparable and were known collectively as the Dioscuri. They were great fighters and warriors. Castor was said to have taught Hercules how to fight.

They travelled with Jason as part of the Argonauts and were said to be the protectors of the Argos. Since that time The Twins have been the patrons or guardians of all seafarers. Twin stars are often depicted on the flags of ancient ships. In 269 BC this image appears on Roman coins that have been found. It is this aspect of the Twins that carries on to this day. Gemini is said to be the sign that rules all aspects of travel.

One of their favourite pastimes was raiding cattle and abducting young women.

On one of these cattle raids, Castor was killed. Pollux was grief stricken and distraught. He could not live without his beloved brother. He begged Zeus to let him die as well, so he could join his brother in the underworld. Zeus would not allow this, as being divine, he was immortal. As a compromise Zeus allowed Pollux to gift Castor half of his life. That way the twins continued to live half their life in the underworld and half among the Gods.

This is reflected in the constellation of Gemini. Each day when the star Castor sets in the west, Pollux follows immediately after and vice versa. When Castor rises in the east, Pollux follows after by his side. 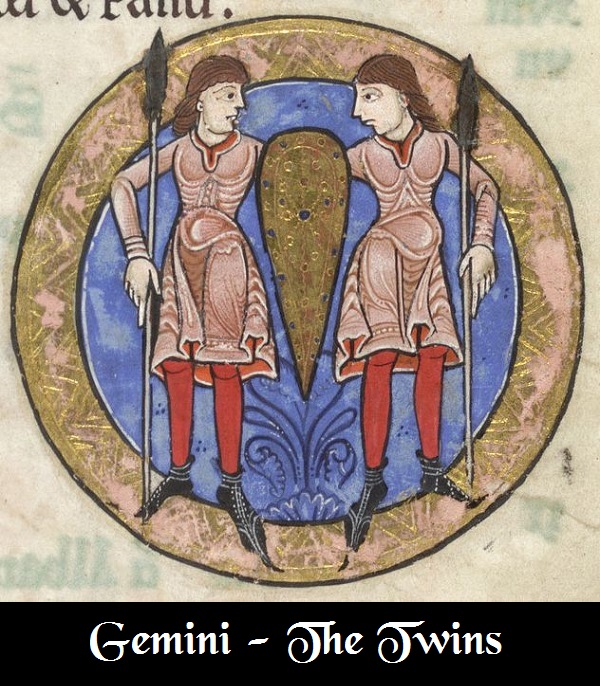 To the ancients, the twins, Castor and Pollux, did not rule the constellation of Gemini. They were the twins.

Thus, Gemini represents the duality of the human spirit. Its darkness and its light. Its positivity and its negativity.

In Chinese astrology it is said that if Mars invaded this constellation, war would ensure. In the east, Gemini was known to the Chinese as yin and yang.

No matter what the myth or what the culture, Gemini represents twin, mirror, dual or opposing thoughts. In many mythologies, they represent dark and light.

Ancient astrologers assigned to this constellation guardianship of the hands. It also signified intense devotion, brotherly love, genius and largeness of mind. Thus, Geminis have long been ascribed to divide their time between the underworld and the dizzy heights of Mount Olympus. They can be volatile and moody, curious, talkative and just like the twins, easily bored and restless. The duller, mundane aspects of life are not for Geminis.