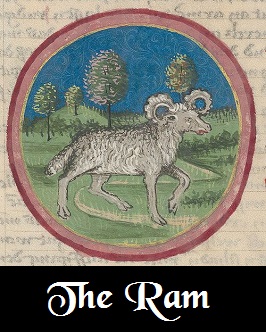 When the ancients looked up and saw the constellation of Aries they saw a Ram.

The Ram is a male sheep, therefore Aries is a masculine sign. The fleece provided rich, thick wool, which when shorn, provided cloth. Rams are shorn in the spring, at the time that the Constellation of Aries is visible in the sky.

It this fleece that gives livelihood to craftsmen, makes garments, is woven into cloth and is bought and sold. The fleece from the Ram was, in those days, precious. No nation on earth could survive without the Ram. It was not only for its fleece, but for breeding that the Ram was important. Often a mans wealth was determined by ownership of these precious gifts. For money, once spent is gone, while the Ram meant that there was potential for ongoing gain. Therefore Aries gift is that of promise of something that although in the future, is tangible now, especially to an Aries. Aries are able to see the true value of things before other Zodiac signs. This is what makes them such good entrepreneurs. 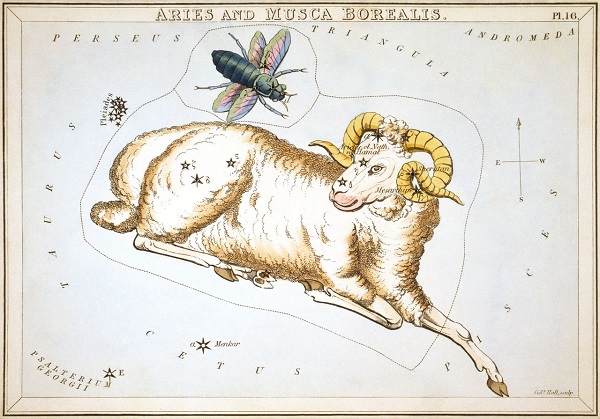 A Ram needs to be master of his own domain and in nature, a male Ram will have a harem of female sheep to copulate with. If another male comes into his territory, he will lower his head and rush forward in a do or die attempt to be the alpha male. It is not to protect his sheep, it is to protect and retain his place in the natural hierarchy. He needs to be No. 1.

For Aries, as a sign, it is often the conquest and quest for love that holds the most excitement.

In the sky, the Ram appears emerging from the waves (rising). Just as Aries does as it emerges from the waters of Pisces, its preceding sign.

There are many myths and stories surrounding the Ram, but the one associated with Aries, is that of the famous Golden Fleece. The fleece that set Jason and the Argonauts on their epic quest.

In mythology, the Golden Fleece has been ascribed to enlightenment and knowledge, it embodies the spirit and the intellect. Thus, Aries is propelled to be forever on a quest.

Jason grew to manhood, unaware of his destiny or who he was. When he was a baby, his father, King Aeson of Thessaly, was murdered by his brother Pelias and his crown taken from him. To protect the child from the same fate, he was given to Chiron the Centaur to take care of him (we meet Chiron in the sign of Sagittarius). When Jason reached manhood, Chiron told him the truth about his birthright, but not before he had taught him all the knowledge he needed and had versed well in the art of warfare and scholarly knowledge. 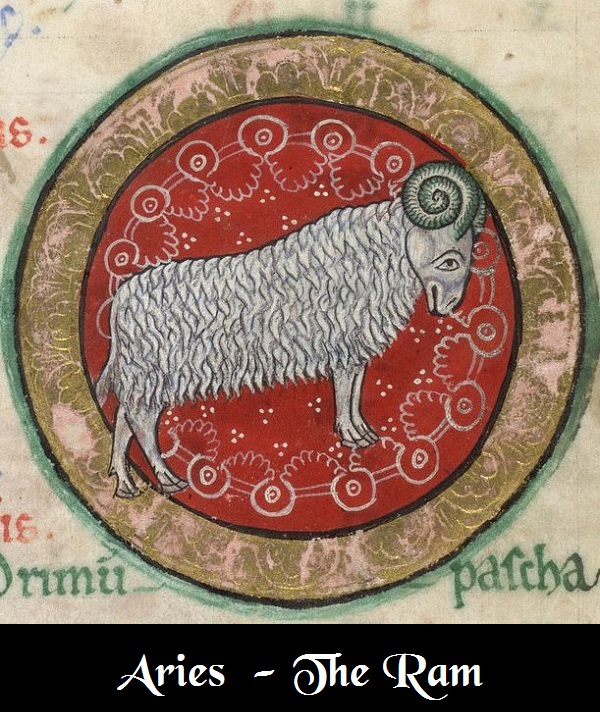 On his way to avenge his fathers death, he lost his footing while crossing a river and one of his sandals was washed away. Thus, he arrived at his uncles court wearing just one sandal. An oracle had told Pelias that Jason would return to avenge his father one day and he would recognise him, because he wore only one sandal. With the prophecy fulfilled, his uncle promised to return the kingdom to him, on one condition, that he retrieved the Golden Fleece from Colochis on the Black Sea. He was not being generous, he was being crafty, for he thought that he was sending Jason to a certain death and because many had tried and all had failed, he would share the same fate.

Jason agreed and proceeded to build a ship (the Argo) and gathered around him a team of heroes to help him on his quest. These were the Argonauts. They included Hercules, Castor and Polydeuces, Orpheus and King Theseus of Athens and many more.

His journey encountered many obstacles as he and his Argonauts battled dragons, monsters, storms, becalming, and gnashing rocks, but he overcame them all and was eventually successful.

He returned from his heroic mission and claimed back his fathers throne. But Jason found it hard to settle back into normality and the responsibility of running a kingdom and for the rest of his days yearned to be back on his epic adventure. For Jason and Aries energy prefer the thrill of battle than settling down to enjoy the spoils. Once one quest ends, the yearning begins for the next one.

Thus, Aries energy is that of leadership and the need for a quest, a fight or a battle to overcome. Not for victory sake, but for the thrill of the quest itself. Just like Jason, Aries energy is about building a team and inspiring others to join in their passion and drive.