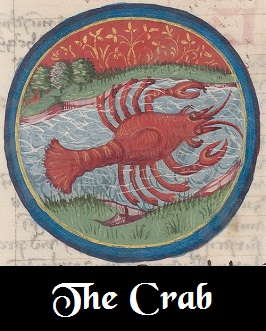 When the ancients looked up into the heavens and saw the Constellation of Cancer, they saw a Crab.

They did not see a group of stars that looked like a crab, to them it WAS a crab, but not just any crab. Hera, the long suffering wife of the philandering Zeus, placed the Crab in the heavens.

Hercules was one of Zeus' many illegitimate children and therefore at the wrong end of Hera's jealousy. While Hercules was off performing his 12 tasks, Hera sent the faithful Crab off to try and stop him. The Crab caught up with Hercules in the marsh of Lerna, where he was battling the 9 headed Hydra. The Crab bit at his ankles and was promptly crushed by Hercules. Hera memorialised her faithful servant by placing him high in the heavens. Cancer, forever after, has been known for its faithfulness and loyalty. 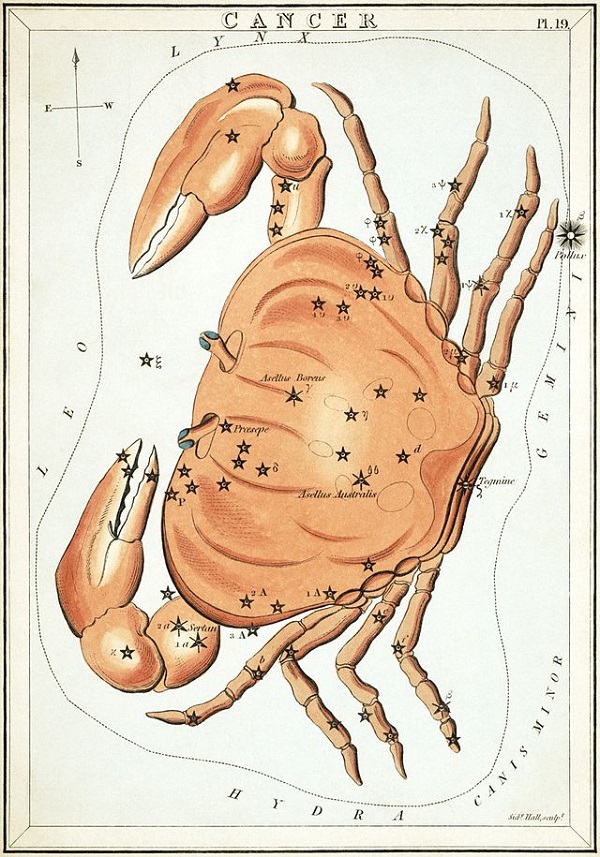 There is, however, one aspect to the Constellation of Cancer that is often overlooked, but goes a long way to explain where Cancereans get many of their otherwise unexplainable characteristics. Among the group of stars that make up the Constellation of Cancer are a small group called the Asses, they appear on the back of the Crab. In mythology, they are said to have been placed there by Dionysos (a God who went insane, the same God who discovered wine). He placed them there in recognition for their help in a tricky spot when trying to get across a large swamp. He had already gone insane by that stage and was attempting to reach the Oracle of Zeus to be cured (the ancient world's Betty Ford Clinic). When he could not get across he came upon two Asses, captured them and rode them across.

To cut a long story short, he was cured, repaid the Asses by placing them in the Heavens, putting them above the Crab. Dionysos was also an illegitimate child of Hera's husband Zeus and she had tried to kill Dionysos before he was even born. So, by putting the Asses above the Crab, Dionysos displayed a brilliant stroke of one upmanship. Cancereans have always been known as the sign that can survive and prevail in spite of inconceivable odds. It is only in recent times that Asses have been associated with stupidity; in the ancient world they were a symbol of wisdom, endurance, tenacity, stubbornness and endurance. They were also a phallic symbol. All Cancerean characteristics. Cancereans are known as wonderful lovers.

The Crab gives Cancereans many of their traits. The Crab is an animal that lives both in the water and on the land. It hides itself behind its shell. When faced by danger it will never fight unless it has to, instead climbing further into its shell. If the Crab is ever in a position that he is forced to fight, especially if his offspring are in danger, he has a wonderful ability to draw on. He will extend his pinchers and attack, but even if a pincer, or a leg is bitten off, he simply grows another one.

The Crab is also very hesitant, something the Sun itself does while moving through the Constellation of Cancer. The Sun is seen to hesitate and even slow down at the Summer Winter Solstice, the date the Sun moves into Cancer. 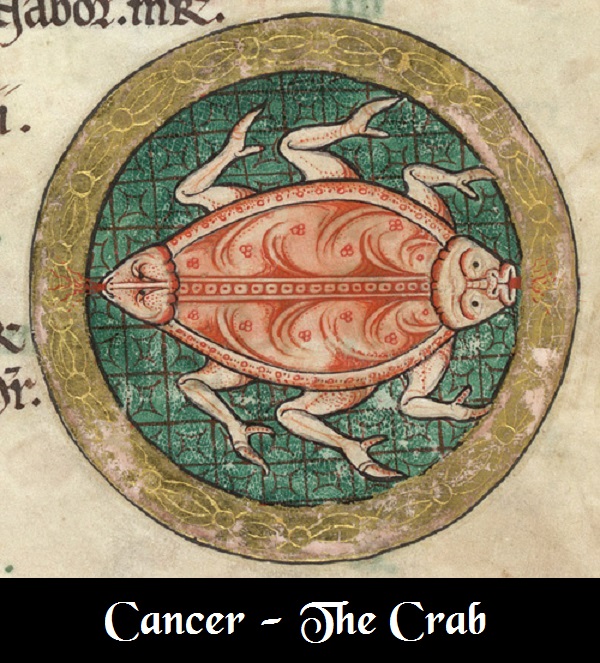 Cancereans have long been known as very intuitive, even psychic. Crabs can find food by using chemical stimuli. The have smell detectors. Crabs rely on this sense organ to find food, mates and avoid prey. All very Cancerean characteristics.

Another trait of the Crab is that when he has outgrown his shell he needs to shed it in order for the new shell to grow. When he sheds his old shell a new, bigger but softer shell is exposed. While in this state he is vulnerable, so the Crab buries himself in the sand until the new shell has hardened.

Cancereans are known to reinvent themselves, but when they do they have an urge to hibernate, to hide away. As they evolve they have periods and cycles where they need to seclude themselves and grow their new shell hard. They emerge back into the world, a new better version than before. The Constellation of Cancer is one of the two Gates of the Gods. These gates are where the Milky Way and the Zodiac intersect. They ascend after death through the Gate of Capricorn to return through the Gate of Cancer.